A new network worm dubbed EternalRocks is making the news this week as the successor to the WannaCry ransomware. EternalRocks leverages some of the same vulnerabilities and exploit tools as WannaCry but is potentially more dangerous because it exploits seven NSA tools that were released as part of the ShadowBrokers dump for infection instead of two used by WannaCry. So EternalRocks has the potential to spread faster and infect more systems. EternalRocks is currently dormant and isn’t doing anything nefarious such as encrypting hard drives. But EternalRocks could be easily weaponized in an instant, making the need for preventive action urgent.

Why EternalRocks may be bigger than WannaCry

EternalRocks does not have a kill-switch which helped curtail WannaCry and mitigate the ransomware damage.

The clock is ticking with EternalRocks; take advantage of the Tenable detection tools now before any damage is inflicted on your systems.

All of the vulnerabilities exploited by the EternalRocks worm were patched by Microsoft earlier this year as part of MS17-010. Tenable released several Nessus plugins to look for unpatched systems or systems that could be vulnerable by having SMBv1 running.

Tenable can also detect if the remote host is infected by EternalRocks worm through its malware detection plugin.

Here’s an example of an EternalRocks hash detected with the Malicious Process Detection plugin ID 59275: 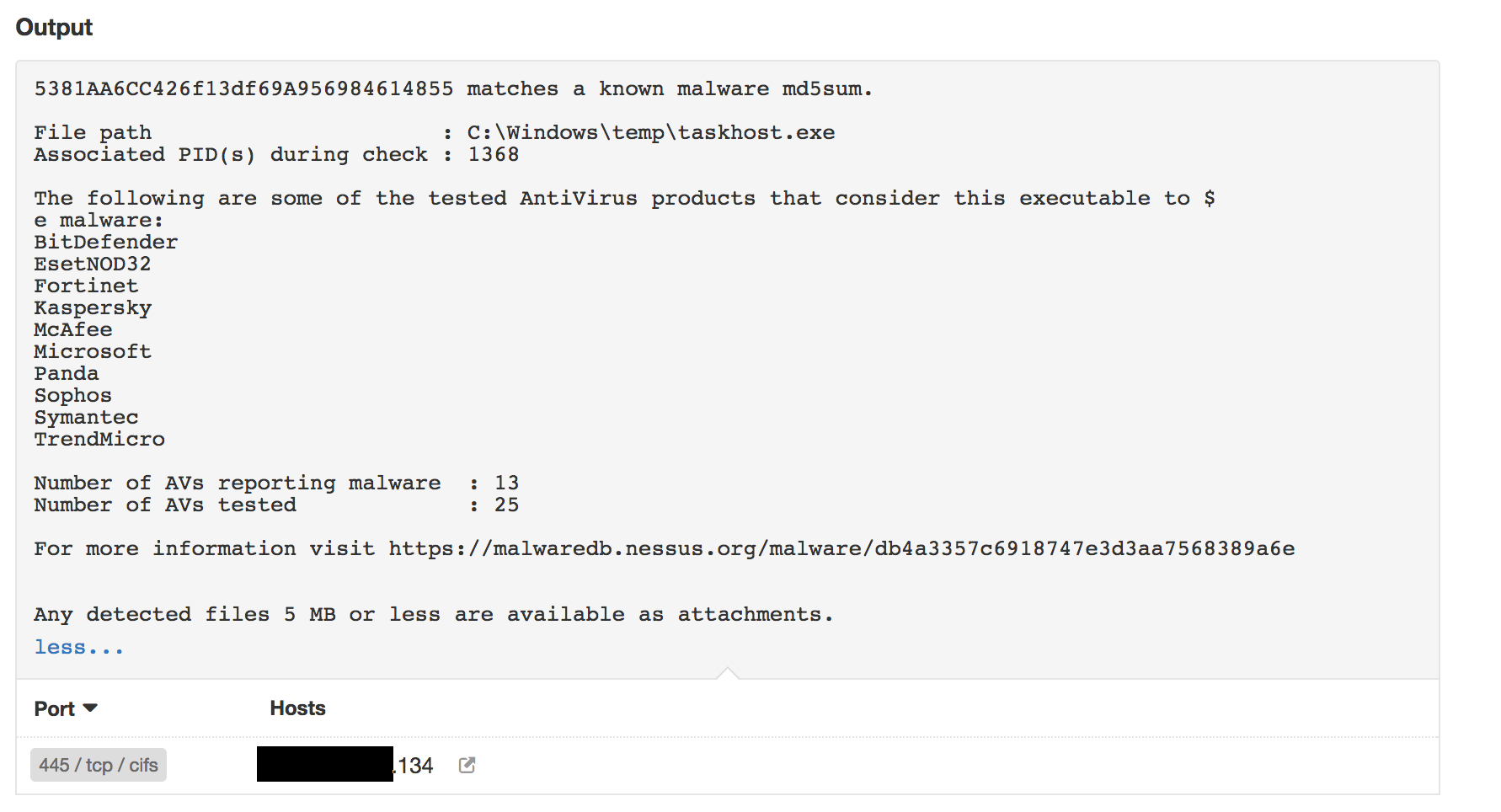 Here’s a sample rule which can be used with Nessus to detect the EternalRocks worm: 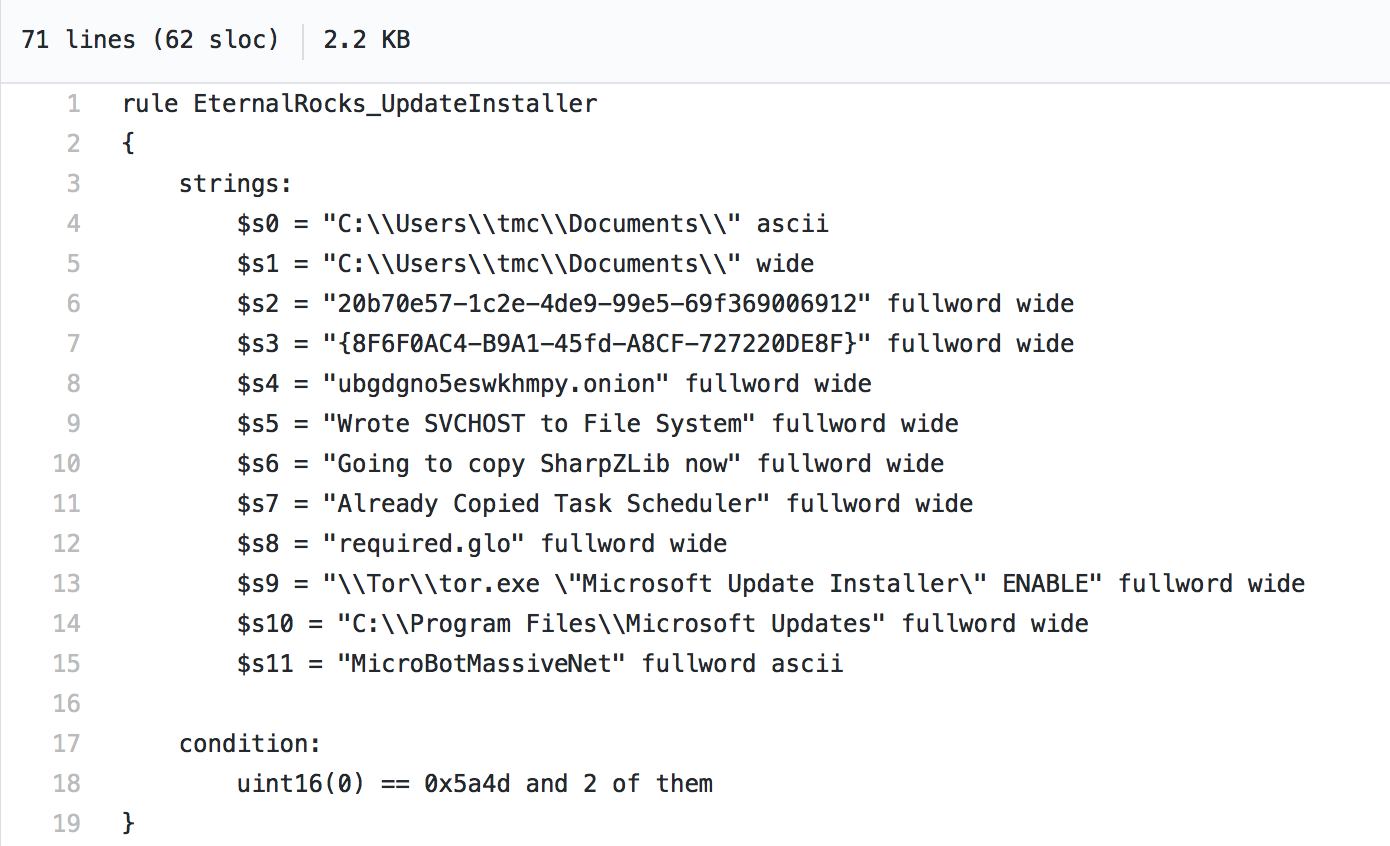 We are fortunate to have some time to detect and patch EternalRocks vulnerabilities before they are exploited. There’s no need for a panic attack, but take time today to protect your systems.

If you don’t patch soon, there might be reason to panic later. One of the things EternalRocks does is that it leaves the DOUBLEPULSAR implant unprotected, which means other threat actors could leverage EternalRocks infected machines for their own intents and purposes.

Make it a habit to patch regularly and often. The single best thing you can do to protect your networks against malware attacks, worms and ransomware is to patch the known vulnerabilities; this is low-hanging fruit with a big return.

Many thanks to Tyler Coumbes, Cody Dumont and the Tenable research team for their contributions to this blog.

Armed with these new capabilities, Tenable users will be equipped to see everything, predict what matters most and act to address cyber risk so they can effectively align their cybersecurity...
Nathan Dyer
October 5, 2020

A new version of the Petya malware is spreading globally, including the European Union, Ukraine and Russia. It has already impacted many organizations, both large and small, and has compromised...
Mehul Revankar
June 27, 2017

Recently, a new threat dubbed Industroyer or CrashOverride was identified as the malware that was used in the 2016 attack on the Ukraine electric grid. Many pros are calling Industroyer the biggest...
Mehul Revankar
June 22, 2017