Update 6/13: Security researchers are now observing active exploitation attempts of this vulnerability in the wild.

1/n IMPORTANT, THREAD: Someone is actively exploiting vulnerable exim servers. The attackers are using that exim vuln to gain permanent root access via ssh to those exploited servers by using a script that's uploaded to that server through that exploit.

CVE-2019-10149 is a remote command execution vulnerability introduced in Exim version 4.87 which was released on April 6, 2016. In default configurations, a local attacker is capable of exploiting this vulnerability to execute commands as the “root” user “instantly” by sending mail to a specially crafted mail address on localhost that will be interpreted by the expand_string function within the deliver_message() function. Remote exploitation under the default configuration is possible, but considered to be unreliable, as an attacker would need to maintain connection to a vulnerable server for 7 days.

At the time this blog was published, no proof-of-concept (PoC) was available for this vulnerability. However, further details about how to exploit the vulnerability were shared on June 6 and have been used to launch attacks, as the above update indicates.

Exim is widely distributed. At the time of publication, Shodan search results show over 4.1 million systems running versions of Exim that are considered vulnerable (4.87-4.91), while 475,591 are running the latest patched version (4.92). In other words, nearly 90% of systems with Exim are vulnerable to local exploitation and potentially to remote exploitation based on the configuration. 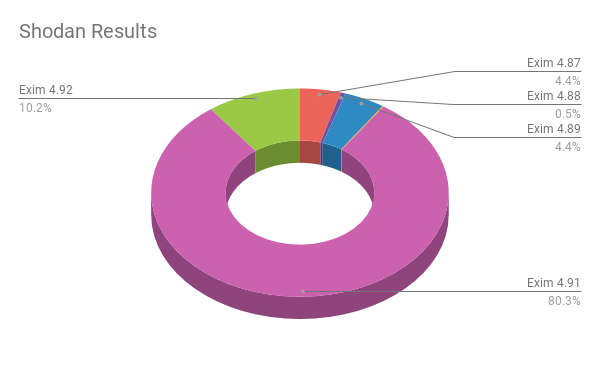 Exim maintainers announced that their fix for CVE-2019-10149 is now public and that it can be backported to all affected versions from 4.87 through 4.91. They note that older releases are “considered to be outdated” and are therefore no longer supported.

Some information about CVE-2019-10149 in Linux Distributions can be found here: