F5 releases patches for multiple vulnerabilities in BIG-IP and BIG-IQ, including a critical remote command execution flaw that does not require authentication and is likely to attract exploits in the near future.

On March 10, F5 published a security advisory for several critical vulnerabilities in BIG-IP and BIG-IQ, a family of hardware and software solutions for application delivery and centralized device management.

CVE-2021-22986 is a remote command execution vulnerability in the BIG-IP and BIG-IQ iControl REST API. The API is accessible through the BIG-IP management interface and self IP addresses. An unauthenticated, remote attacker could exploit this vulnerability by sending a specially crafted request to the vulnerable REST interface. Successful exploitation would give an attacker the ability to achieve arbitrary code execution on the vulnerable system and, according to F5, “lead to complete system compromise.” We consider this the most severe of the vulnerabilities patched by F5 because it does not require authentication and its potential for successful exploitation is high.

All four vulnerabilities require an attacker to be authenticated to the vulnerable system in order to exploit these flaws. In some instances, specific configurations are required, such as the device running in Appliance mode and/or with the provisioning of the F5 Advanced Web Application Firewall (WAF) or Application Security Manager (ASM).

CVE-2021-22991 is a buffer-overflow vulnerability in the BIG-IP Traffic Management Microkernel (TMM) due to the improper handling of undisclosed requests with a destination of a virtual server. F5 lists certain configurations of BIG-IP as vulnerable, including:

CVE-2021-22992 is a buffer-overflow vulnerability in the Advanced WAF or ASM virtual server due to the way the Login Page is configured. F5 says that in order for an attacker to exploit this vulnerability they would need to be able to either manipulate server-side HTTP responses or control the back-end web servers. At a minimum, the attacker would be able to cause a denial-of-service (DoS) against the vulnerable device. In some instances, the attacker could gain arbitrary code execution privileges.

At the time this blog was published, a Shodan query shows that there are over 5,000 BIG-IP devices that are internet-facing, each of which could be potentially vulnerable: 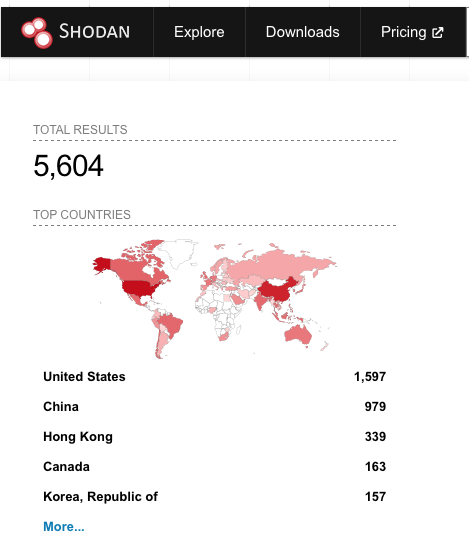 For practitioners, it's hard not to recall last summer’s F5 advisory for CVE-2020-5902, a critical remote code execution vulnerability in F5 BIG-IP’s TMUI that was quickly exploited in the wild after its disclosure. Because of its severity and overarching impact, CVE-2020-5902 was featured as one of the Top 5 Vulnerabilities in our 2020 Threat Landscape Retrospective report.

We anticipate that CVE-2021-22986 will follow in the footsteps of CVE-2020-5902, as attackers begin to actively scan for and attempt to exploit this flaw in the wild, with a proof-of-concept expected to become available in the near future. The seriousness of these vulnerabilities is further reinforced by the Cybersecurity and Infrastructure Agency’s (CISA) latest advisory encouraging users to apply patches as soon as possible.

At the time this blog post was published, there were two proofs-of-concept available:

F5 released patches to address all seven vulnerabilities. The following table contains the affected versions as well as the fixed versions of BIG-IP and BIG-IQ.

All customers of BIG-IP and BIG-IQ are strongly advised to apply these patches as soon as possible.

If applying the patches for CVE-2021-22986 is currently not feasible, F5 has provided temporary mitigations that can be applied to restrict access to the iControl REST interface either via blocking access through self IP addresses or blocking access through the management interface. Please note these mitigations should only be used temporarily until you can apply the provided patches.

A list of Tenable plugins to identify these vulnerabilities can be found here. To scan for vulnerable devices, users are required to enable the “Show potential false alarms” setting, also known as “paranoid mode,” in their scan policy.

We also recommend enabling only these specific plugins in a paranoid scan. Scan policies configured to have all plugins enabled will see an increase in the number of triggers, as it will include all paranoid plugins during the scan.

To enable this setting for Nessus or Tenable.io users:

To enable this setting for Tenable.sc users:

Open Banking Is the Future: 5 Ways to Secure Your Network

The sharing of financial data across applications is changing how consumers save, manage and spend their money. Here's how financial institutions can secure the next generation of banking. Open...
Team Tenable
May 6, 2021

Disrupting the Pervasive Attacks Against Active Directory and Identities

Continuously detect and respond to Active Directory attacks. No agents. No privileges. On-prem and in the cloud.